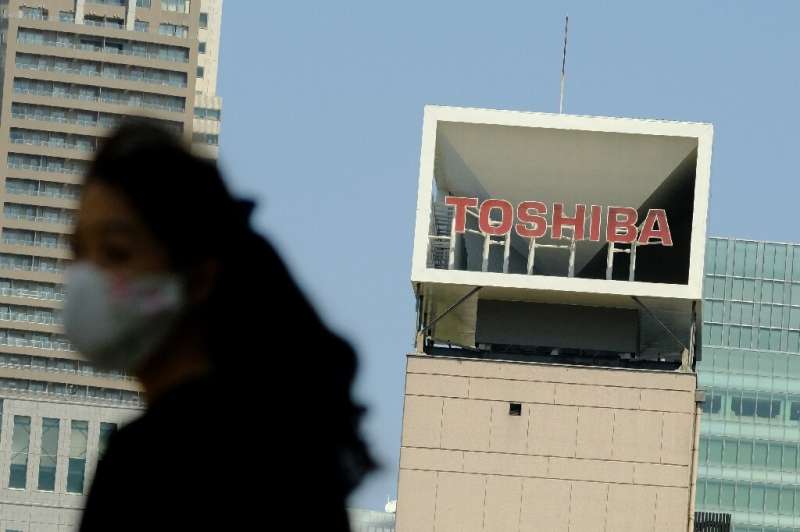 Once a shining symbol of Japan’s advanced technology and economic power, Toshiba has been rocked by turbulence in recent years, facing scandals and losses before staging a recovery.

The industrial giant dates back to 1875 when its forerunner— a telegraph factory—operated in central Tokyo. It forged its success in the 1980s by developing flash memory chips and pioneering laptops.

But the conglomerate, whose vast business ranges from semiconductor manufacturing equipment and escalators to storage devices and nuclear plants, found itself falling behind Asian and US rivals even before the turmoil of the mid-2010s.

As company president Nobuaki Kurumatani resigns amid reports of a potential bidding war for the firm, AFP charts Toshiba’s recent highs and lows:

An external panel finds that high-level Toshiba staff were involved in “systematically” inflating profits by $1.2 billion between 2008 and 2014, pressuring underlings to cover up weak results.

The company president and seven top executives resign over the ballooning scandal in July as its stock tanks and a painful restructuring begins with more than 10,000 jobs cut.

The scandal hits Toshiba at a weak point after the 2008 financial crisis and 2011 Fukushima disaster, which squashed demand for atomic power in Japan and dealt a blow to its key nuclear division.

In a scramble to recover, the company sheds businesses including its medical devices unit, which Canon buys for nearly $6 billion in March, and most of its home appliance subsidiary, which goes to China’s Midea.

Despite this, the group suffers a record net loss of around $4.4 billion for the 2015/16 financial year.

In another dramatic turn of events in December, Toshiba warns of a potential writedown topping $6.3 billion at its US nuclear subsidiary Westinghouse Electric, whose tech is at the core of around half the world’s nuclear reactors.

Strapped for cash, Toshiba is forced to try to sell part of the family silver—its memory chip business, which accounts for around a quarter of annual revenue.

The conglomerate posts a net loss of $8.8 billion in 2016/17 as it faces the humiliating threat of being delisted from the Tokyo Stock Exchange.

It raises 600 billion yen ($5.3 billion at the time) in new capital with foreign activist investors rushing in, but is demoted to the TSE’s second section.

After months of delays and complications, the $21-billion sale of prized chip unit Toshiba Memory to a group led by US investor Bain Capital is completed in June.

Toshiba retains a 40 percent stake in the chip business, which is renamed Kioxia.

The deal is seen as crucial to keeping Toshiba afloat, even as the firm says it has bounced back into the black and avoided delisting by ceding assets and debts related to Westinghouse.

Toshiba sells its PC division to Japanese rival Sharp and liquidates its British nuclear subsidiary NuGen, meaning its only nuclear dealings are now in Japan, where it is involved in the decommissioning of the crippled Fukushima plant.

Toshiba works on its financial woes and strengthens its governance, with a board now composed of mostly external directors.

But the group faces pressure from activist shareholders who want to see faster growth and a clearer long-term strategy.

The crisis comes to a head after Toshiba’s July 2020 annual general meeting, as some shareholders call for an independent inquiry into vote irregularities—a demand refused by company management.

Toshiba wins a return to the prestigious first section of the Tokyo Stock Exchange, but it faces pressure from activist shareholders, whose demand for an independent probe into the last AGM is approved.

In early April, Toshiba says it has received a takeover offer from private equity fund CVC Capital Partners, reportedly in excess of $20 billion.

Company president Nobuaki Kurumatani resigns on April 14, as reports say two other funds are considering their own offers for the Japanese household name—potentially setting up a bidding war.